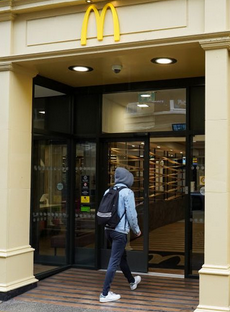 The McDonald’s Corporation announced that 1200+ locations across the United Kingdom would be temporarily closing by March 23rd. This decision was prompted after fears regarding the coronavirus pandemic continues to escalate in this region. Before the ultimate choice of full-store closure was made into effect, McDonald’s had previously closed their seating areas in Britain and Ireland. The drive-through services and takeaway options were still provided to consumers. However, Covid-19 is spreading throughout the United Kingdom, and the protection of staff has become drastically important.

Prime Minister Boris Johnson forced the decision onto McDonald’s, with financial analysts stating that this corporation claim for the protection of employees and customers is a PR Move. The decision to keep Drive-Thrus and Takeaway options open would’ve been maintained unless Boris Johnson didn’t require all Non-Essential Businesses to close immediately. Considering that 135+ thousand citizens in the United Kingdom are employed by McDonald’s, this decision should’ve been maintained earlier on. Employees with McDonald’s are receiving financial compensation until April 5th, which will be roughly the timespan before the UKs Government can implement the Financial Aid Package. Staff will be awarded 80% of their standard wages.

Unnamed individuals spoke with the BBC, expressing that franchisees with McDonald’s aren’t required to pay employee wages until April 5th. It’ll be at their discretion if these individuals receive any payments. Considering that most franchisees run on limited budgets, most financial analysts have concluded that these employed citizens won’t receive compensation.

The United Kingdom’s McDonald’s CEO expressed that throughout the last 24 hours, medical experts have determined that all restaurants must maintain proper social distancing measures. The Drive-Thru and Takeaway options were determined to be unsafe. Paul Pom noted that it’s become challenging to operate, prompting the closure of all McDonald’s Locations in Ireland and England by 7 PM on March 23rd. Paul also noted that he continually ensured his Corporation-based employees’ safety.

All Corporation-owned locations have had minimal cases of Covid-19, with those numbers being considerably higher for franchisees. It’s unknown if punishments will ensue for the franchisees that didn’t obey government protocols. Considering that the hospitality industry and their employees have struggled drastically in recent weeks, it’s expected that legislation will be implemented to ensure that large-scale corporations are punished for lack of compensation.