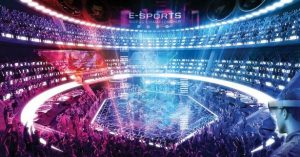 It’s quite surprising to learn that sports games are absent in the massive and recent uptick of eSports in the United States. The world championship for League of Legends managed to sell out at the Staples Center, drawing more viewership than the 2013 Masters. However, games like NBA 2K, FIFA, and Madden have yet to see such a high level of spectators in their games.

One would assume that sports games are one of the most accessible video game genres to transform into an attraction for eSports. When you look at Madden, you’ll notice that the game enjoyed a long and fruitful period in the media with it’s genuinely competitive Madden Challenge that was on everyone’s minds long before eSports was a thing. The Madden Challenge was mostly a tour across 32 different NFL cities, hosting a massive tournament for players to test their skills against each other. There was even an ESPN reality show for the game that managed to last four seasons. Unfortunately, the tour came to an end after gamers were divided between the Xbox 360 and PS3.

The Potential of Sports Games in eSports

Even though EA Sports decided to revive the Madden Challenge on a much smaller scale, and recently announced an eSports focus on the game, the road to creating an established spot for Madden and loads of other sports games, while DOTA 3 and League of Legends is in the world, remains a long and winding road. We recently had an in-depth discussion with Kevin Mamouzette, a man who owns and operates compete4ever.com, a New York-based company that hosts the biggest in-person Madden competitions in the country.

Mamouzette stated that the competitive nature that Madden delivers has the potential to explode far beyond the imagination of any gamer or publisher. However, with most eSports genres, support from the publisher is necessary for a thriving competitive scene. Mamouzette also stated that the Madden Challenge had a large following ten years ago, but eventually started dying out. Thankfully, EA Sports decided to team up with Virgin Gaming and MLG to provide a Madden eSports series which has been in development for the last five years.

With EA Sports placing more focus on the Madden game, and with support from other companies, the groundwork is perfect for Madden to grow within the eSports world.

How to Introduce Sports Video Games to eSports

We then asked Mamouzette why sports games haven’t grown in the world of eSports since its inception and what could be holding it back. Mamouzette responded that most of the sports video games come with a wide variety of competitive balance issues that first need to be fixed before it can be introduced into the world of eSports. Mamouzette also believes that providing more sports games on PC, or just merely providing more publisher support for sports video games will make a huge difference when it comes to including sports video games into the eSports world. It’s all up to the publisher to make it happen.