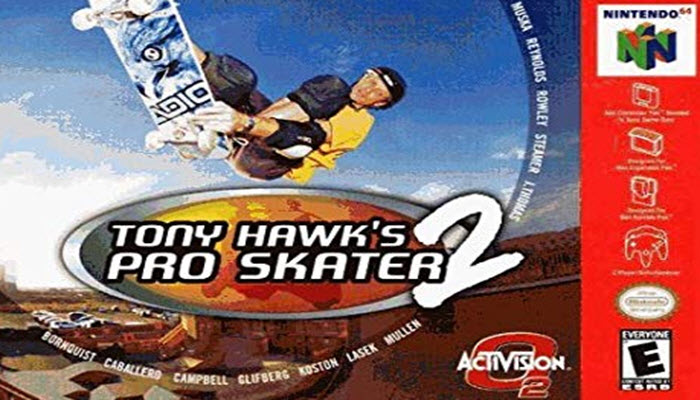 During the late 90s, punk rock reached an all-time high in popularity, people used the word ‘radical’ more often than not, and skateboarding experienced a resurgence thanks to the assistance of Tony Hawk and his phenomenal skills. This incredible sport also found a place in video games with the Pro Skater series that allowed everyone to become a master at street and vert in minutes. With that in mind, let’s take a look at some of the best skateboarding games that you can still play today!

Tony Hawk Pro Skater 2 is considered one of the best skateboarding games to ever be developed. If you are searching for a to-the-point game involving skateboarding, this game is unmatched by any other skateboard game in the world. It comes equipped with a perfect physics system, a comprehensive selection of professional skateboarders, and a level editor tool that allowed you to spend hours on the game to create your very own skate park. The game impressed even more when you realized that some of the best punk rock songs in the world were included as soundtracks from artists like Race Against the Machine, Anthrax, Lagwagon, and Millencolin to mention but a few.

The first couple of Tony Hawk entries all focused on skateboarding alone. However, with Underground, several odd decisions were made by the developer that allowed you to get off your skateboard and walk around the virtual world to complete a wide range of other activities. Thankfully, it didn’t lose the focus on skateboarding, and it came equipped with a comprehensive story filled with betrayals and celebrity appearances. Even though it moved away from only being a skateboarding game, it’s still a classic video game that cannot be ignored.

Electronic Arts arrived late at the party but managed to produce Skate 3 in the skateboarding genre which turned out to be one of the best skateboard games from the developer. The game was initially released back in 2010 and was far more grounded than the offerings set forth by Activision. It had loads more focus on skill-based gameplay when it came to skating and managed to establish a huge following and fans are still asking for a sequel to this day. Instead of using punk rock as a soundtrack genre, Skate 3 decided to incorporate electric mixes that included Steel Panther, Beastie Boys, and Dinosaur Jr to mention but a few.

The Backyard Sports package from Humongous Entertainment allowed you to play hilarious versions of hockey, football, soccer, basketball, baseball, and skateboarding. The game offered a simplistic 3D experience developed for kids along with a focus on over-the-top goofiness and power-ups over realism. You will also appreciate the fact that the game came equipped with fictional sponsors, Andy Macdonald as a pro skater, and customizable gear to make the game as diverse and flexible as possible.