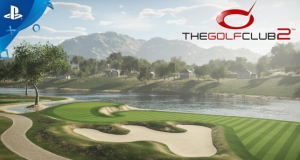 Back in the day, PC was considered the home of golf video games with the likes of Jack Nicklaus, Links, and even the PGA Tour. You were mostly spoiled for choice when it came to golf games. However, slowly but surely, the golf video game genre started fading away. This arrived at the original Golf Club so exciting in 2014, a total of 4 years following the departure of EA Sports and their phenomenal Tiger Woods versions on PC.

Golf finally made a comeback to the sports video game genre with Golf Club. However, although it was considered a phenomenal simulation with a fascinating lack of gimmicks where the game purely focused on the sport, it did lack in several other areas which the sequel managed to fix elegantly.

You will find a full career mode in the latest Golf Club 2 sports game along with a modern twist for added excitement. Instead of only participating in prescribed tournaments and golf courses embedded by the developer, you will also have the opportunity to design your own from scratch. You will also be able to create your very own season, choose which golf courses you would like to include, and how many rounds should be played.

The only downside to the career mode is that it doesn’t feel as hand-crafted as it should be with visual flourishes and cinematics to make you feel like you are playing the British Open or Masters. This is one area where the PGA Tour video games managed to excel in. However, one can easily forgive HB Studios for not having the same budget as EA Sports to buy the rights to such glorious events.

The lack of tutorials in the original game was a common complaint from players and its quite clear that HB Studios considered this when they developed the second version of the game. The core of the game feels very familiar, and we highly recommend that you play the game with a controller as the mechanics behind each golf shot is designed for an analogue stick as opposed to a mouse. Pull back for the power of your swing, followed by pushing forward. The more straight you’re follow-through is, the straighter the golf ball will go.

The tempo is a brand-new addition to the Golf Club 2 game. If you push forward or pull back too quickly or too slowly, your shot will suffer the consequences. If you manage to get both right with the perfect tempo, your ball will travel the distance. This essentially provides an extra layer of depth in the overall swing system, which is challenging to get right at first. Therefore, it will take patience and time to get it right, much like a real golfer on the golf course. You will also find a practice area to fine-tune everything about your game before heading to your next tournament.