PlayerUnknown’s Battlegrounds (PUBG) has proven that it is the best battle royale game currently on the market. It is simple, yet effective, in its approach to gameplay. Up to 100 players are dropped onto a map and must fight to the death. 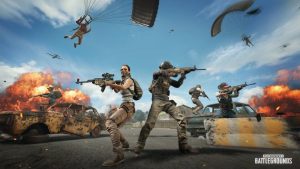 One of its best features is the ability of players to land wherever they desire. It means experienced gamers can start the round at their favourite spot. Despite this, there is undoubtedly still an element of chance that helps determine which players get the best gear.

The straightforward nature of this game means that loading times are reduced. There is less emphasis on graphics. Compared to other recent titles, PUBG already looks relatively outdated regarding textures. Developers have instead decided to focus on streamlining the player experience.

This game is clearly inspired by the classic Japanese film, and manga title, Battle Royale. Just like that story, PUBG places people on an island, where they must kill each other until one person is victorious. There is also an ever-increasing kill zone that forces players to move further into the map.

Battle Royale was a popular media property, and there have been several attempts to turn it into a game. PUBG stands out as the most popular unofficial game adaption of this movie. There are clear inspiration elements from it.

Despite this, PUBG has grown to overshadow Battle Royale. It now stands as a fantastic brand in its own right. More and more people are beginning to enjoy it as a game to play online.

It has now been ported onto smartphones. This could be a game changer for online titles. Not only will it further increase the number of people playing PUBG, but it will also likely lead to other well-known games, following suit in the next few years to come.