Red Dead Redemption 2 will undoubtedly be, one of the most highly sought after games on the market. It is set for release in late October 2018. The game will be a prequel to the lauded original Red Dead Redemption, which was first released in 2010. 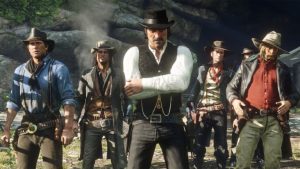 This prequel takes place several years before the first game. It follows an outlaw gang in the old west, as they maraud through the landscape. Players take control of a character called Arthur Morgan. It is up to the gamer whether Arthur will do good or evil.

One of the most anticipated aspects of the game is its online mode. Rockstar Games are the developers behind this title. They have already proven that they are capable of creating exciting online gameplay. This has already been seen with their much-lauded GTA Online. It seems likely that Red Dead Redemption 2 will follow in the footsteps of this game.

So far, Rockstar has kept relatively quiet about what can be expected from the online mode of this new game. Like other Rockstar Games, it seems likely that the player will be able to roam around the map freely. There are sure to be ample mission opportunities available. The exact nature of these has not yet been revealed.

Much of the game will be spent on horseback, as the player travels through a varied number of terrains. There will be an action element, thanks to the numerous gunfights that were previously seen in the first game. Players will also have many moral choices to make, and how they respond will affect the game later on. For instance, if they choose to kill someone, then a posse may confront them later to take their revenge. Red Dead Redemption 2 is probably going to be one of the best selling games of the entire decade.