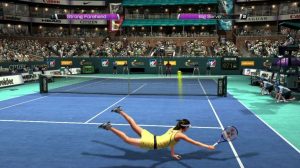 When it comes to discussing the most popular sports video games on consoles and PC’s, tennis will not make the top 10 list. Sports video games like basketball, football, and soccer will be discussed, but indeed not tennis. It also doesn’t help that the big three in the sport hasn’t changed at all in the last decade.

Nadal, Djokovic, and Federer are still dominating the game even though the big three have been playing for as long as anyone can remember. The same can be said when it comes to female tennis due to the Williams sisters. So why on earth would video game develops spend an enormous budget on a tennis game at all?

Thankfully, there are a handful of tennis video games available on the market that are well worth your time and money. These games can be enjoyed on your PC, PlayStation 4, or Xbox One and will provide hours of nail-biting action on the court or the grass. With that in mind, let’s take a look at the tennis games you need to consider playing right now.

Virtua Tennis 4 is considered the king when it comes to arcade tennis games, dominating the market since it was initially released on the Sega Dreamcast back in 1999. The latest offering comes equipped with simplistic yet addictive gameplay mechanics, slick controls, a full career mode filled with glorious activities, and excellent visuals to provide a truly magnificent gaming experience. The game also impressed with a remarkable doubles mode that allowed for two-player entertainment and offered all the AAA players from the past and present to make it more appealing to players.

If you don’t consider yourself someone that enjoys arcade games and you are more interested in playing a game of tennis where accuracy, timing, and skill are essential when it comes to smashing the ball, you can’t go wrong with a game like Top Spin 4. It’s the best tennis simulation game on the market that features complicated controls to provide even more of a challenge. However, once you’ve mastered the authorities, there are endless possibilities to what you can do on the court. The game also boasts with an incredible roster of tennis stars and comes with all the major tennis tournaments you can think of.

When the Wii was initially launched, it came equipped with a wide range of sports games. Although bowling was considered the number one sport on the Wii, especially with the funny videos that showed how people broke their televisions, it was tennis that eventually stole the limelight due to its original gameplay functionality, and the entertainment factor is provided. It offered fluid motion controls, and anyone could learn the game. So, if you are not interested in playing tennis with remote control, this is the answer. You’ll not only be more healthy and active on over a weekend, but you’ll also stretch some muscles.