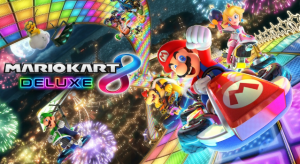 There’s nothing quite like Wii Sports, providing the ultimate sports gaming experience on your Nintendo console with five different sports games. Each game allows you to use a remote to essentially mimic real-life sports actions, such as bowling and swinging. The Wii Sports that are included in the game are boxing, golf, bowling, baseball, and tennis. You can play any of these games through a single-player mode or against friends with multiplier mode. There’s also difficulty settings in each sport to make it as challenging as possible.

The Mario Kart franchise has always managed to offer the best racing experience for players, and the Mario Kart Wii is no exception. The Mario Kart Wii comes equipped with a Wii Wheel, allowing you to drive like a professional without having to use your remote to turn your vehicle into each corner. You will be greeted by obstacle-filled tracks, several racing themes, and specific items, such as bombs and bananas, to gain boosts and deter your opponents. You will also be treated to a wide range of different vehicles and motorcycles along with stats that will significantly affect your speed in the game.

FIFA 15 on the Wii will give you the impression of watching a real match live. It will provide you with the feeling of being on the pitch among your favourite football stars while trying to defeat your opponents. The FIFA 15 game for the Wii was constructed from the ground up along with a simulation that places life into every detail of the game. You will be introduced to 35 different leagues, more than 600 clubs, 41 stadiums from around the world, and 16,000 players. There’s also a bunch of innovative features that make the game genuinely appealing to players, including Ultimate Mode, Career Mode, and more.

NBA Jam on the Nintendo Wii is something that you will need to experience for yourself as it’s impossible to describe in words. The version for the Wii is based on the 1993 arcade game. This means you can look forward to a quick 2-versus-2 baseball match that comes equipped with a funky visual style and incredible gameplay abilities that will allow you to leap at high altitudes to perform slam dunks. You also won’t be restricted by game rules and fouls, so you can do pretty much anything you want to win. There are even hidden features and cheats to use in the game to make it more fun.