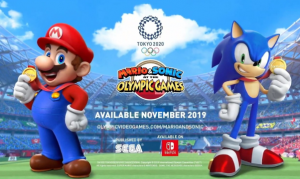 Transforming the Olympics into a sports video game is both a terrible and fantastic idea. The Olympics seem like a tailor-made genre for jumping and running in the world of video games. However, once reality sets in, it becomes a button-smashing operation that adds no value to the player. With that in mind, let’s take a look at some of the ridiculous sports video games that are based on the Olympics.

This Olympic-themed game will see you forgetting how to walk in no time. The game is named after the keyboard keys that you will need to use to control the player’s thighs and calves. You will then need to master these keys if you want to go for gold in this strange game. Just be careful, once you learn the keyboard keys, you might forget how to walk altogether.

There’s no denying that Activision developed some of the best game during the Atari era. However, Activision’s Decathlon was undoubtedly not one of them. Don’t get us wrong, the visuals were terrific, and the fact that ten games could fit on a single cartridge was mind-blowing. However, abusing the joystick by moving it back and forth as fast as possible was a huge problem. There are loads of players that were able to break the joystick in half after a single session in this game.

This game was truly unique for its time, especially when you consider the sporting events that were included in the game. For instance, how far can you throw your wife? Can you pole vault over a massive dinosaur? Do you have the speed and agility to outrun a fearsome tiger? It’s was remarkable. However, like most games on this list, you were mindlessly mashing buttons to get anywhere in the game. There was no sequence or secret to becoming a master.

We are still trying to figure out what went wrong with the developers of this game back in the 1980s. The game is roughly based on the Summer Olympics in 1984 that took place in Los Angeles. However, you play with a hunchback character that gives you the impression of Quasimodo in the Hunchback of Notre Dame. Why? Did the creators believe it was a loveable character for kids? Thankfully, the game played just like all the other arcade video games.

Mario & Sonic at the Olympics

This was the first official Olympic game from Nintendo that placed Mario against Sonic the Hedgehog. The only sad part about this game is that Sonic is considered the fastest creature on the planet. So how on earth can Mario outrun him? Well, play the game, and you’ll see him do it. This is yet another game where the creators lost their minds and couldn’t come up with a better idea to make a brilliant Olympics sports game. Let’s hope there’s not a sequel.